My favourite scene from Blade Runner is Rutger Hauer’s monologue at the end of the movie, as his replicant character Roy schools Harrison Ford’s character Deckard on life.

“I’ve seen things you people wouldn’t believe,” he says, in the pouring rain. “Attack ships on fire off the shoulder of Orion…”

While I definitely can’t lay claim to that, I’ve witnessed – and found myself in the middle of – some decidedly strange things over more than 30 years of reporting on crime, politics, and pretty much everything else here in Surrey.

This Sunday (May 23) will mark the 30th anniversary of my being hired on full-time as a reporter in this city, way back when it was still called a municipality.

I don’t intend this to be a memoirs thing, or ass-backward resumé. Suffice to say, I suspect one or two of my stories were taped to refrigerator doors, while thousands more were used to line the bottom of pet cages. I wrote two books along the way – one was a B.C. bestseller for seven weeks – and I’ve been mentioned in 12 other books that I’m aware of.

Strangers bought me drinks at a bar as Liberal and Tory MPs yelled at one another in the House of Commons, on television screens across Canada, because of something I’d brought to light. 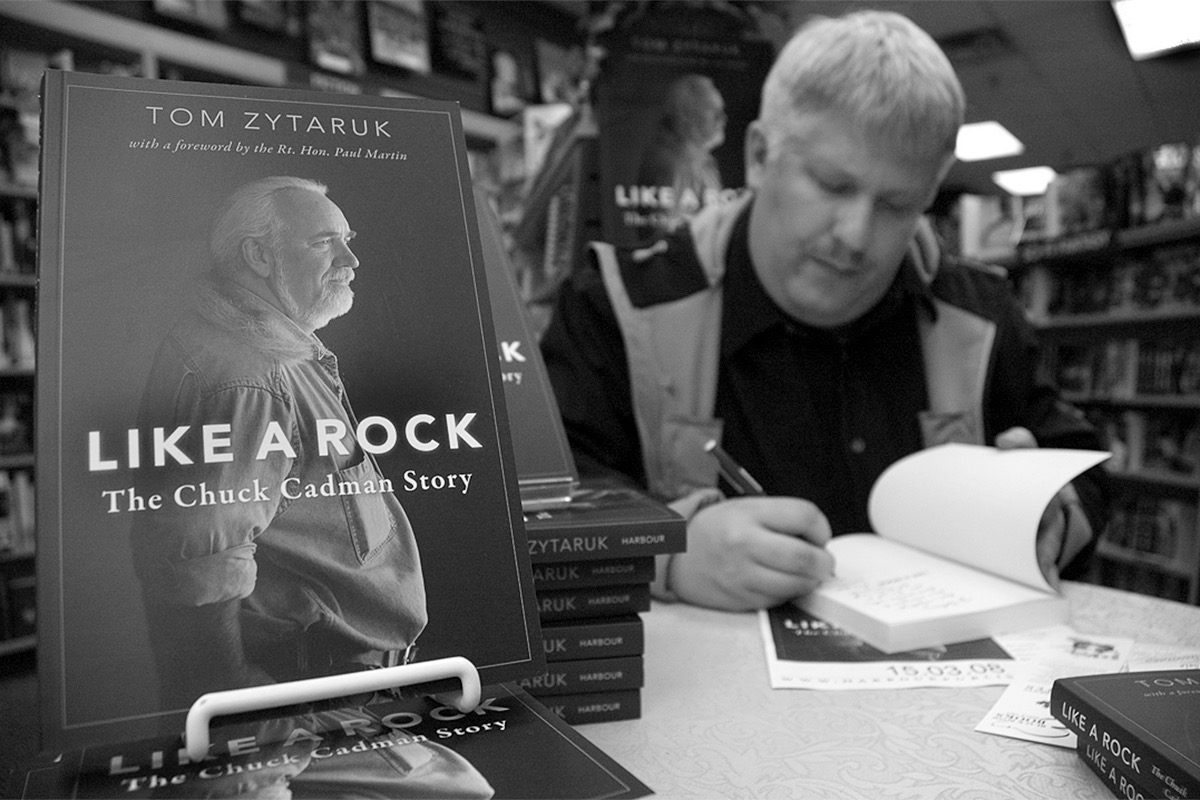 Tom Zytaruk signs a book during the launch of ‘Like a Rock: The Chuck Cadman Story’, at Guildford Town Centre’s Black Bond Books in March 2008. (Photo: Dixon Tam)

Ever get the feeling you shouldn’t enter a room? I did, one afternoon long ago, as I gripped the brass handle of a big wooden door at Surrey provincial court. A hearing was underway concerning two guys who’d been dubbed Newton’s tag-team rapists.

I stepped in anyway.

The court room was filled to capacity. The moment I opened the door, the QC defence lawyer standing beside the judge’s bench turned on his heel, his black robe flowing, and pointed at me. “That’s him,” he said.

All heads, and twice as many eyes, turned my way.

The judge, leaning out farther than anything natural, beckoned me with his bony finger to come forth. Apparently they’d just been discussing something I’d written.

“You know there’s a publication ban?” he began. I replied I hadn’t reported on any evidence disclosed during the preliminary hearing simply because I hadn’t been there to hear it. With that, my little dance with the surreal was abated. Outside court, the prosecutor told me not to stress out as the judge was newly appointed and being “officious.”

READ ALSO ZYTARUK: For those about to snore…

I remember rolling my eyes and blurting “C’mon” as three Surrey Mounties jumped up and down in front of our photographer, like yo-yos, trying to block her shot of child killer Clifford Olson being unloaded from a chopper behind the detachment building. She got it, bless her.

“You’re finished,” a senior city bureaucrat snarled, during a break in council chambers, jabbing his stubby finger at my chest. That kind of made my day.

Been threatened, been praised, been called a “fat feckless fool.” That was when I was more prosperous around the midsection. I can say to a moral certainty I’m not quite that fat any more.

A sitting prime minister called me at my desk from his office in Ottawa, and a premier drove me around Newton in my own car. It looked like a giraffe had been stuffed behind the wheel of my little bucket of a Ford Escort, while I scribbled down his quotes from the passenger seat.

I tumbled after police, as they chased down the hallway of a Whalley apartment building, following a blood trail, in hot pursuit of a guy with a knife. This was during one of those ride-alongs that don’t happen anymore.

Showed up at a murder scene in Bridgeview roughly the same time as homicide detectives did. I happened to be in the area, listening to my police scanner. The corporal barked at me, “Zytaruk, what the hell are you doing here?”

Also wrote a story in an unrelated case that helped the Surrey RCMP’s Unsolved Homicide Unit lay a manslaughter charge, and learned that smearing Vicks VapoRub on your moustache can help keep the stench of death out of your nose.

A headline I wrote, and later a story, too, both drew laughs on the Tonight Show with Jay Leno.

Ah, there’s so much more but, as always, I seem to have run myself out of space. Guess all those moments will be lost in time, like tears in rain.

Tom Zytaruk has been a reporter with the Now-Leader for 30 years and we hope he stays for 30 more.

journalismSurreyzytaruk column so let it be done

OUR VIEW: It’s up to us to finish this pandemic

Report to be discussed at June 28 council meeting

QUIZ: A summer’s day at the water

How much do you know about boats, lakes and water?

Walmart getting rid of human cashiers at B.C. store as part of pilot project

‘Maybe this time they will listen’: Survivor shares stories from B.C. residential school