On weekdays, Aliya Grewal is a Grade 9 student at North Delta’s Seaquam Secondary. On weekends, she’s the youngest baker at Clayton’s Happycakes bakery and the artisan behind its popular cake pops.

“When she first started, we would tell her ‘this is a picture, make it like that.’ Then it just started being like, ‘what do you feel like making?’ And then she made unicorns and she made galaxies [out of the cake pops],” she said.

Aliya’s cake pops, which sell out every week, display a decorating style that leans towards the childlike and the whimsical.

“My favourite was the unicorn and the bumblebee one,” she said about her cake pops. “Probably because they’re different than just looking like a normal ice cream cone. They’re cuter.”

Aliya, 14, has always enjoyed baking — ever since she got her first Easy Bake Oven in Grade 2 at a school fundraiser.

She “was so determined to bake all the cookies and cakes she could. And she did,” Aliya’s mother, Noreen Mahmood Grewal wrote in an email. “I used to bake a lot when the kids were little, and would try to make cute cakes for their birthdays. When they got older, I got busier and found it easier to just buy their cakes.”

That wouldn’t do for aspiring cake artist Aliya, who took it upon herself to bake cakes for her three siblings.

“I remember baking a cake — and then just slapping a bunch of icing on and piling a bunch of candy on it,” Aliya said, laughing. “It’s like ‘Tada. Here’s a cake.’”

As Aliya got older, her interest in baking and cake decorating grew. Eventually, her mom contacted Rachel Jongejan (who is a niece of a family friend) for advice on where to find cake decorating classes for Aliya. The result was a six-month long volunteer stint that ultimately led to her paid position at Happycakes.

“It just started out really slow,” Jongejan said. “We just had her folding boxes and stickering stuff, and slowly had her sprinkling cupcakes with us.”

Eva Poole, Jongejan’s mother and a baker at Happycakes, said Aliya was both competent and eager.

“We’ve had other volunteers, you know, people that just shuffle their feet and don’t know what to do next,” Poole said. “Aliya takes initiative, and she knows what to do.”

“You can tell the difference between someone who is working to work and working because they love their job,” Jongejan added. “And Aliya loves her job.”

On Valentine’s Day, Aliya volunteered as a cashier, selling around 700 cupcakes in one day. Later that month, she was hired on part-time. She has since been able to improve her baking and decorating skills through her work at the bakery.

“I’ve learned everything here,” she said. “Before, the cake pops was the thing I never thought I could master. I think the first time I tried making cake pops with my mom was when I was seven or eight.

“They would fall off the sticks and fall into the bowl and stuff, so when I did it here I was nervous I was going to mess it up. But then Rachel was like ‘I believe in you!’ And now I can do it all by myself.”

“Like, start to finish,” Jongejan added. “She rolls the balls and everything now too. She does the whole thing.”

The experience, and some additional decorating classes, has allowed Aliya to start doing her own cake orders outside the bakery. Although her orders are mostly from her mom’s friends or co-workers, she’s getting about one a week now and documents the results on her Instagram page (@rainbow_sprinkles03).

“Everyone says I should open my own bakery,” Aliya said, sitting in the colourful front entrance of Happycakes. “I hope that happens someday, but I don’t know.”

For Aliya, it’s okay to not know. After all, it’s not every baking entrepreneur that has the rest of high school to figure it out. 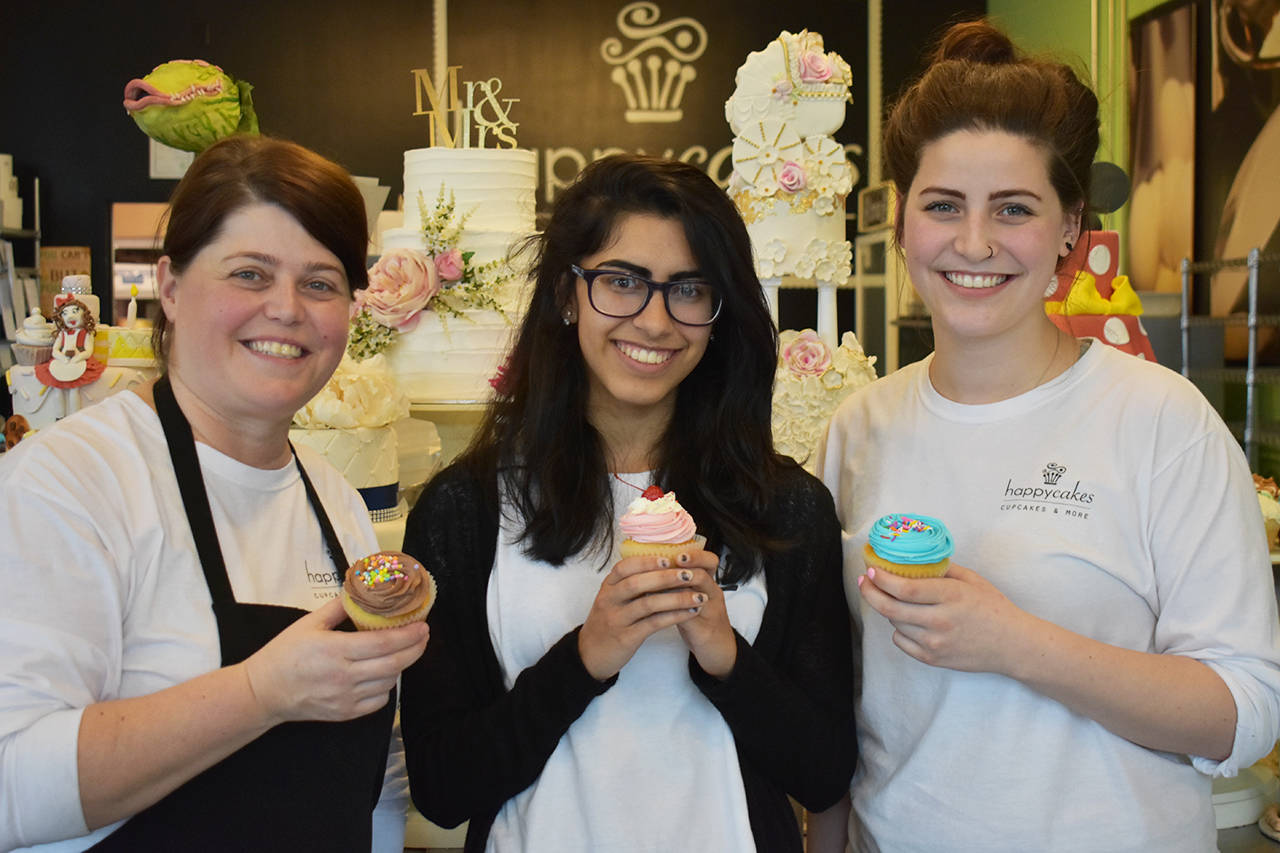 VIDEO: Work is play for this B.C. avalanche rescue dog