In the coming months, Cloverdale will lose an iconic piece of artwork.

A mural featuring local veteran Bill Larson has occupied a spot of honour in Veteran’s Square since 2005, looking out over the cenotaph. For 13 years, the painting has been a backdrop for Remembrance Day ceremonies and a reminder of the cost of war for Surrey residents.

But soon, the mural will have to come down, making way for the expansion of the Surrey Museum and the relocation of a number of heritage properties.

For Surrey art teacher Marc Pelech, it’s a bittersweet moment. He was one of the organizers behind the “Lest We Forget” mural, bringing together students from Sullivan Heights Secondary and North Surrey Secondary over seven weeks to create the mural.

“Is it lost history?” he asked, sitting in his classroom at Sullivan Heights. “The paint may fade, peel or get redeveloped. But the story doesn’t end or disappear.”

The “Lest We Forget” mural’s story will live on, as museum volunteers have digitized the mural, and the museum plans to replicate it within the new building. And it’s also something Pelech has done in his work as an art teacher.

“Lest We Forget” isn’t the only mural in Cloverdale that Pelech helped organize. Between 1996 and 2006, Pelech and students from across the Lower Mainland painted 55 murals in Surrey, Delta, Langley and Ottawa.

It started more than 20 years ago, when Pelech was a teacher at Queen Elizabeth Secondary. At that time, the art students were stuck in portables while a section of the school was rebuilt, a state Pelech’s students would be in for three years.

“Kids weren’t really feeling empowered, I think, as a community in those days,” he said. “I wanted to get them to learn, you might say, how to fish … Let’s learn to earn opportunities.”

Pelech and his students began working on art outside the classroom. Together with Jim King and Peter Maarsman from the Surrey Crime Prevention Society in 1996, Pelech started the Spirit of Youth project with three pilot murals.

One mural, in keeping with the crime prevention theme, was on a Mr. Lube building off King George Highway reminding people not to drink and drive. The second was of Whalley’s Corner, painted at Central City Mall. And the third marked the start of the project’s deep roots in Cloverdale: “Keeping Our Memories Alive” was painted on the side of the old Surrey Museum and Archives building on 176 Street, and featured a synthesis of First Nations, pioneer, first world war- and depression-era characters.

The pilot came at the right time for Surrey, Pelech said.

“It was a Renaissance period for our city,” he said, “where we just had the right civic support, governmental supports, funding supports, where people would come together and they’d be excited.”

Over the course of the project, nine murals were painted in Cloverdale, thanks in part to King being a Cloverdale resident.

“Jim [King] really just wanted to help with the gentrification of the neighbourhood,” Pelech said. “During the timeline that overlapped the murals, the street culture of Cloverdale was quite vibrant. The murals also added to that kind of destination.”

Two murals were painted on the old Surrey Museum building, while the Cloverdale Arena and Shannon Hall saw one each. Others are painted at Don Christian Elementary, the Port Kells Library, Western Stampede and Tack, Fire Hall No. 8 and, of course, Veteran’s Square.

The goal of the project was to empower students in art, and it reached out to students in many more schools than Pelech’s Queen Elizabeth Secondary and Sullivan Heights Secondary classes (three Lord Tweedsmuir students became key parts of the project over its 10-year life). Students were paid to create the murals during the summers, and many went on to work in other public art projects in Surrey.

But now, the legacy is starting to fade. Of the nine murals in Cloverdale, three have been lost to renovations. The Fire Hall No. 8 mural could be gone in the next year as the City of Surrey looks to replace the exterior of the hall. And when the Surrey Museum becomes the Museum of Surrey, the Veteran’s Square mural will be gone too.

But new murals have been created since then as well, including one on the side of the BC Vintage Truck Museum.

“You have to accept the fact that it’s like a sandcastle,” Pelech said about the murals. “You may create the greatest sandcastle that afternoon on the beach, but you know the wave is going to come back the next day and just wash it away.

“You have to be prepared to accept change,” he said. 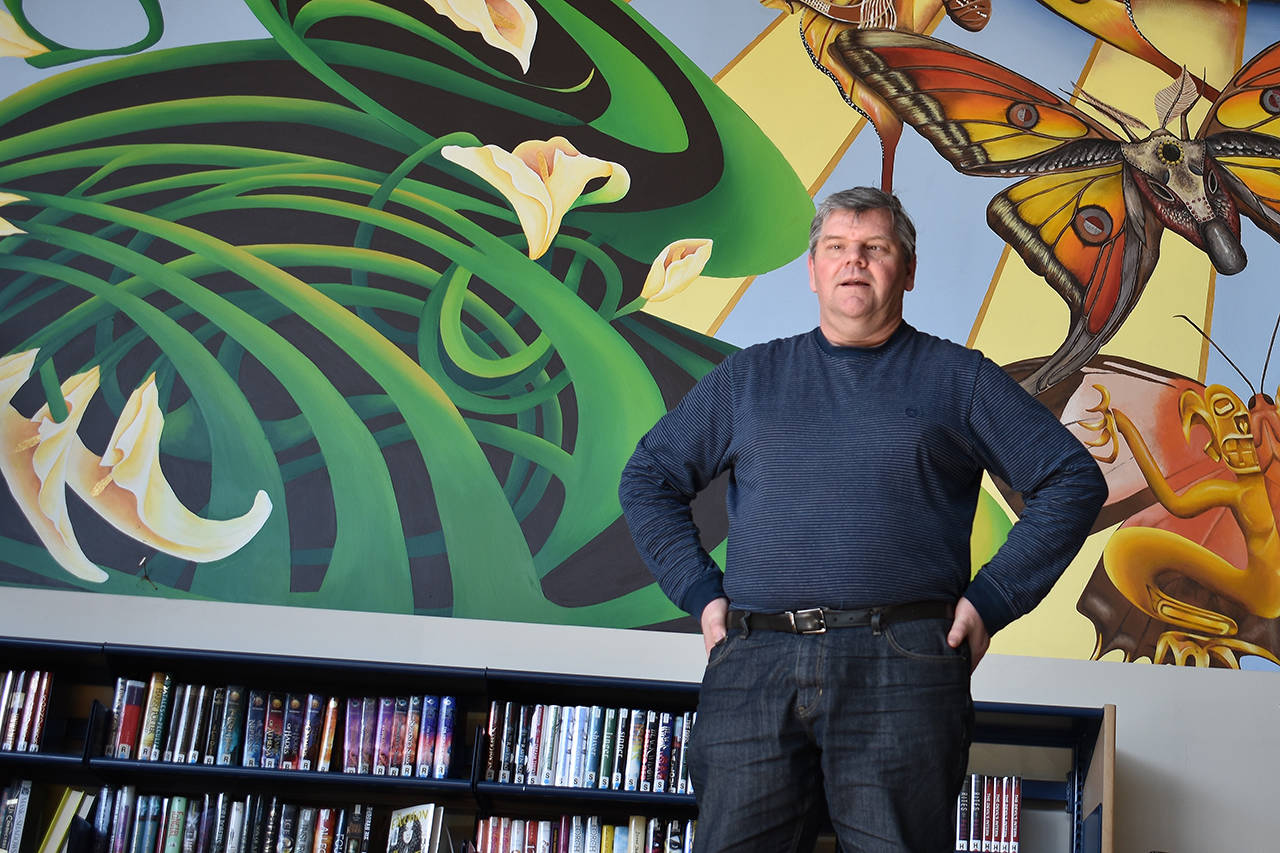 Art teacher Marc Pelech next to one of the Spirit of Youth murals in Sullivan Heights Secondary. (Grace Kennedy photo)