With the 15th anniversary of John Tenta’s death this spring, friends and family are only keen to reflect on the wrestling career of the Surrey-born man known around the world as Earthquake.

Not only that, sumo fans called him Kototenzan, and at other times Tenta answered to Avalanche, The Shark and Golga on the North American circuit.

Fellow pro grappler Mark “Gorgeous Michelle Starr” Vellios knew him as a “gentle giant” who once fueded with World Wrestling Federation legend Hulk Hogan and won the company’s tag-team championship with partner Typhoon – big stuff for a guy who grew up in Port Kells and had roamed the halls of North Surrey Secondary.

“He was a big guy, big heart, gentle giant and a very nice guy,” Vellios recalled, “although he could be mean – not mean, but you’d awaken the gentle giant if you did him wrong, you know, but that wasn’t very often.”

A Surrey resident, Vellios wrestled on the same card as Tenta a few times, including on a tour of Britain in the early 2000s, about five years before Tenta died of bladder cancer on June 7, 2006. He was 42.

(Story continues below video: The Life and Career of “Earthquake” John Tenta)

Asked for some memories of Tenta, Vellios sent a photograph of the two enjoying beers with fellow wrestlers Chic Cullen and Togi Makabe in Birkenhead, England, on a day not long after 9/11.

“I originally met John when I came to Canada in 1988, and he came back to All-Star (Wrestling) for a bit when he came back from Japan, and I was there,” Vellios said. “I’ve actually never had a match with him, ever, even though we were together quite a bit, off and on over the years.

“In England,” he added, “at that time he was a lot smaller than before, wasn’t as big, because he lost a lot of weight. He wasn’t wrestling fulltime anymore and I think he was driving a truck in the States and also had a wrestling school down there, in Florida, and he was also in Texas as well.

“That was the last time I saw him, in England.” 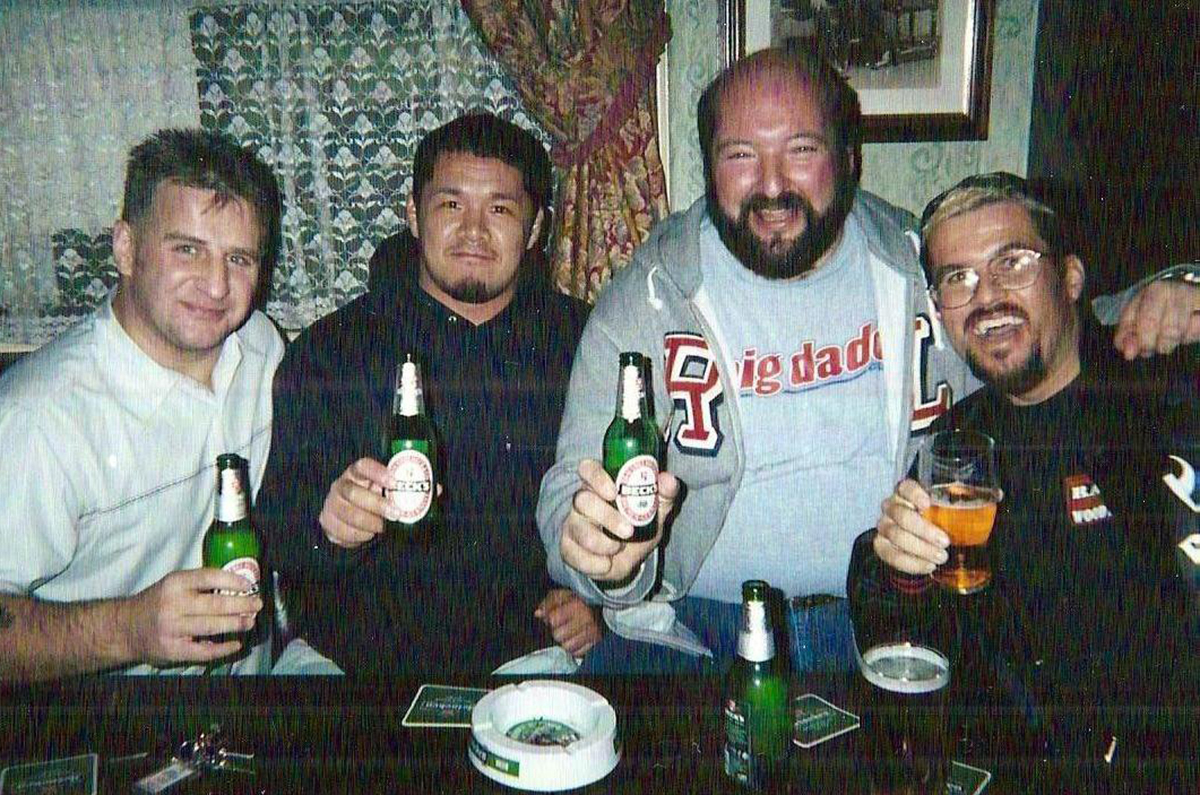 “After all those WWF (matches) he came back to British Columbia and he was a big draw, filling places, and he was always a pleasure to work with, in and out of the ring – just a great guy, and I can’t say anything bad about him whatsoever.”

This spring, Cloverdale’s Museum of Surrey showcases a few pieces of Tenta memorabilia as part of a “Shake Up: Preserving What We Value” exhibit, including an “Earthquake” action figure, a magazine and a deck of trading cards.

Earthquakes are some of nature’s most powerful forces, confirms curator of cxhibits Colleen Sharpe, and Tenta “certainly evokes that energy with the persona he created, which makes his legacy a perfect fit for the exhibit,” which runs until June 6. For details, call 604-592-6956 or visit surrey.ca/museum.

The museum’s curator of collections, Kristin Hardie, helped create the exhibit with the help of Tenta’s son, Jeff Tenta, who lives in Florida with his wife and two kids.

Asked how he felt about his father being included in the exhibit, Tenta said it was a proud moment for the family. “We’re happy that his community appreciates it – it’s good to know people care,” Tenta says in a news release sent by the museum.

John’s sister, Brenda Tenta, lives in the Brookswood area of Langley, and their older sibling, Lorna, lives in Abbotsford. “Dad has passed away and mom is in a care home,” Brenda noted.

It was always fun to be around John, she said.

“He was very good-natured and always kept in touch with the family and brought back souvenirs from wherever he travelled,” Brenda added. “He went to a lot of places around the world.”

(Story continues below video of John on CBC-TV in 1986, after he left the sumo wrestling world)

Baby of the family, John had won a world junior wrestling championship soon after high school and first rose to fame in Japan as a sumo wrestler. Back home in Surrey, “Big John” was a popular and easy-to-spot figure around town.

“I remember hearing stories about him playing rugby in high school and dragging half the opposing team down the field,” Ken Torrance posted to the Facebook group We Grew Up In Surrey BC so we remember. “He was huge. And thankfully nice from what I heard. I bumped into him at a gas station in Whalley. When he got into his truck it sank down low and I wondered how much does he weigh? Must have been close to 400lbs. Earthquake! Good name.”

Brenda fondly remembers the time her “little” brother earned a wrestling scholarship to Louisiana State University, where he was taking courses to become a social worker.

“But then they were looking for someone to be the first white sumo wrestler in Japan,” Brenda recalled. “The master flew out to Vancouver for the tryouts of the person picked to go to Japan, and it was John who was chosen. So he went there and had to live in the stable with the other wrestlers. He was winning pretty well all of his matches there, so he was well known in Japan.”

By 1989 Tenta had hit the bright lights of the WWF, long before it became WWE. His biography on wikipedia.org details those pro days, which involved matches with and against Hogan, Dino Bravo, Jake “the Snake” Roberts, Bam Bam Bigelow, Bret Hart and others. Tenta made his WWF television debut on an edition of WWF Superstars of Wrestling, “where he was planted in the audience as a normal spectator at the taping held in Wheeling, West Virginia,” according to the post.

(Story continues below video of Earthquake attacking Hulk Hogan in 1990)

Tenta retired from wrestling in 2004 after being diagnosed with the bladder cancer that killed him a couple of years later.

“We were very close,” Brenda said. “The day he died, it was on our mom and dad’s anniversary. We were all with him in Houston (Texas). He found out he had cancer and had doctors in Florida and stuff, but then they found out he was terminal, a specialist told him about this hospital in Texas.… The cancer was aggressive, and when he died the cancer had spread. It was too much for him. He died with everyone around him, all his family.”

Last fall, thesportster.com website looked back at “Hulk Hogan Vs. Earthquake: 10 Things Most Fans Don’t Realize About Their Rivalry, 30 Years Later,” crediting Tenta as “a natural monster heel” in the early 1990s.

Given such accolades, among many others, Tenta would be a lock for the Surrey Sports Hall of Fame, if and when it ever gets built. 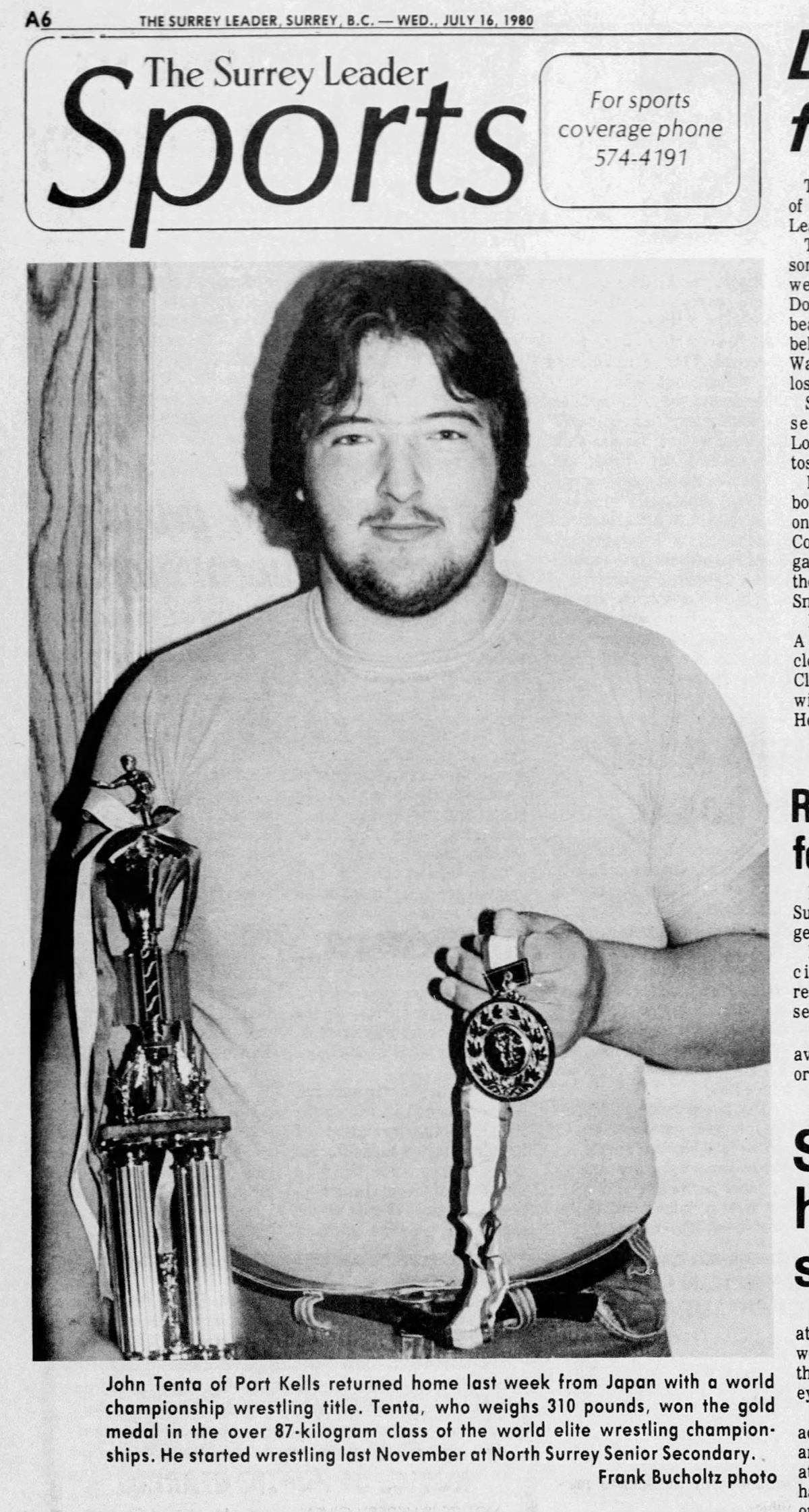 Photo of John Tenta in the Surrey Leader edition of July 16, 1980, when he returned from Japan with a world championship wrestling title. (Image courtesy Surrey Archives) 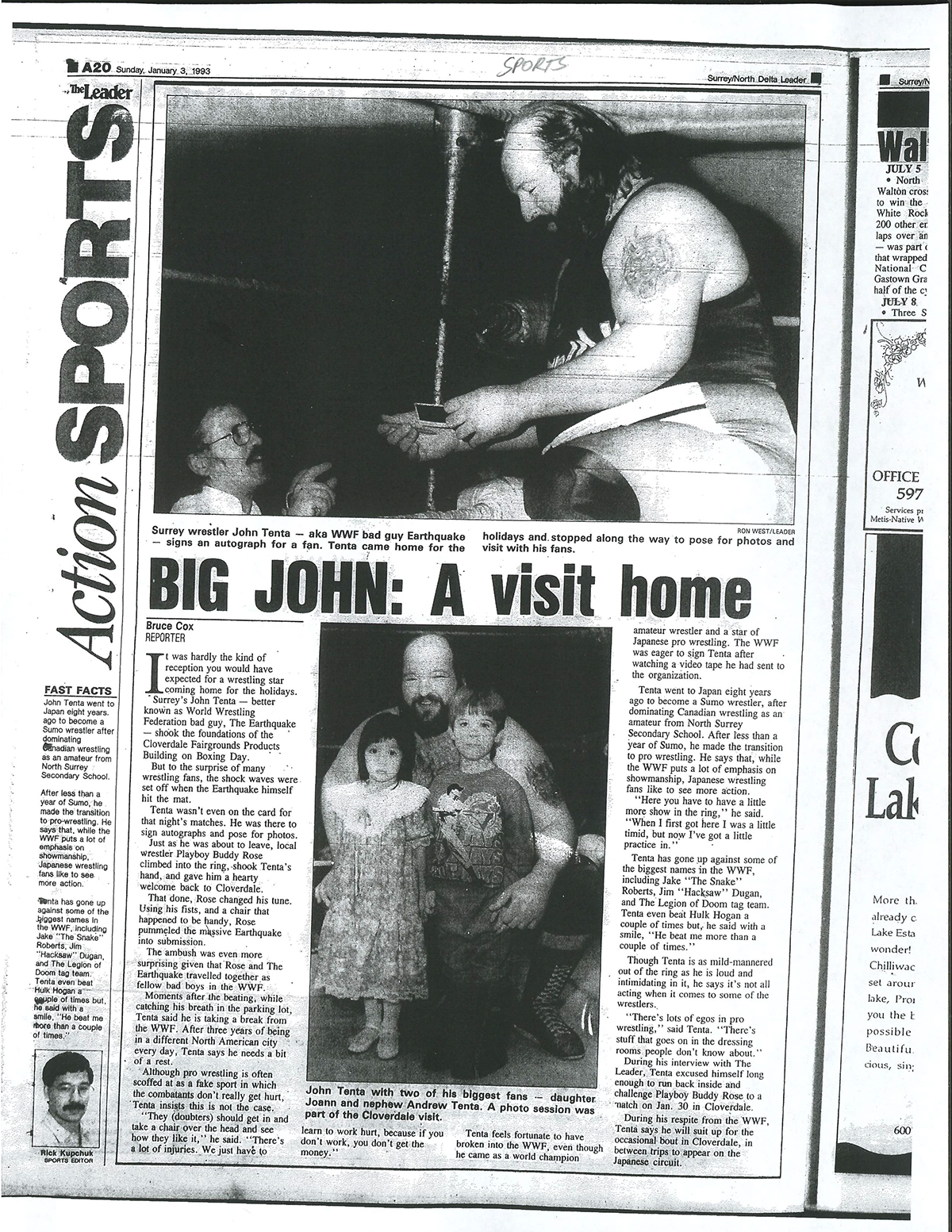 Surrey Now & Then is a weekly look back at Surrey-area landmark sites, events and people. Email story ideas and tips to tom.zillich@surreynowleader.com. We thank Surrey Archives for assistance with this series.

CLICK HERE to read more Surrey Now & Then stories in this series, or see some below:

‘Spy house’ now a pub, a dream project of man who didn’t live to see it open.