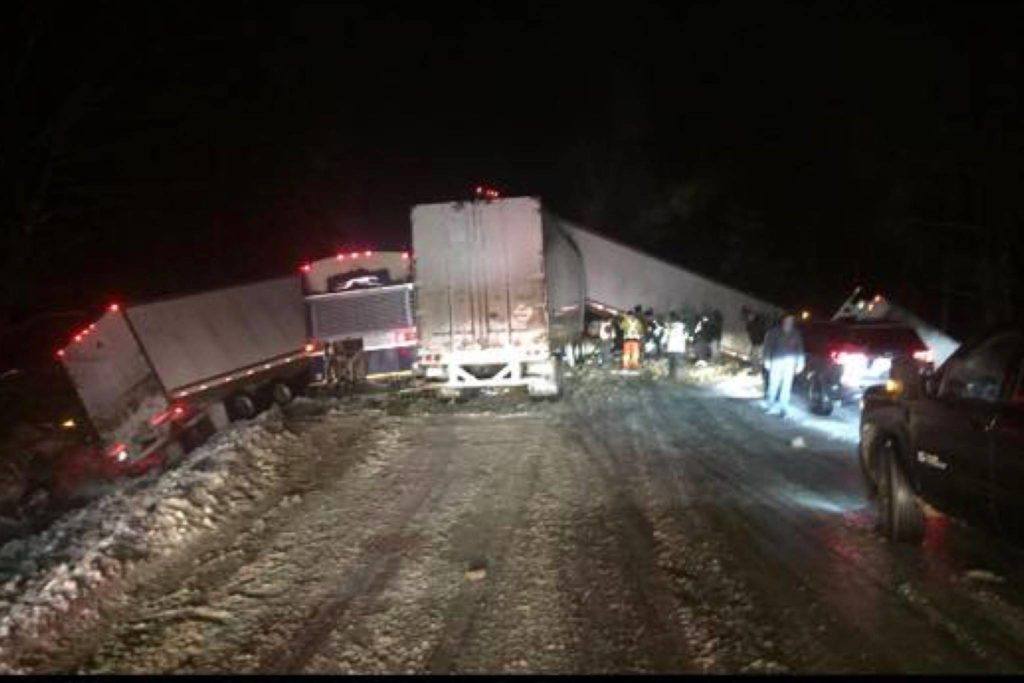 The RCMP released a statement about the crash, saying the snow and ice “are considered to be a major contributing factor.”

The statement reminded drivers to slow down, increase space between themselves and other vehicles, and ensure their vehicle has proper tires for the season.

DriveBC now reports the Coquihalla is open again in both directions.

DriveBC reports the Coquihalla remains closed southbound. The highway is expected to fully reopen to traffic at 8:30 a.m.

The Coquihalla has reopened northbound after a serious multi-vehicle crash sent 29 people to hospital Sunday evening.

BC Emergency Health Services’ latest update early Monday morning stated 29 people were taken to hospital with range of conditions from stable to critical.

An additional 136 uninjured people were transported to a warming centre in Hope.

The accident reportedly involved two semi trucks, two buses and two vehicles, prompting the closure of the Coquihalla in both directions north of Hope just before 8 p.m. Sunday.

About six hours later, just before 2 a.m., DriveBC reported the highway had reopened to northbound traffic. The highway still remains closed southbound with no current estimate on reopening.

A local detour is available via Exit 183 / Othello Road to Hope to Highway 1 or an alternate route from Merritt is Hwy. 8 to Hwy. 1

The next update is expected at 7 a.m.

Posted by Hope Volunteer Search and Rescue on Monday, February 26, 2018

Graham Zillwood lives across the street from the crash site and said he was watching TV when he heard what sounded like ‘a tree breaking’.

He looked out his window and saw a car about 200 feet away that had crashed down an embankment. He immediately called 911 and as he was speaking to the call taker, he said he saw a semi-truck hit another vehicle, which was also sent down an embankment.

According to other witnesses on the scene, several other vehicles were also involved in the crash.

“It’s a real mess here,” Zillwood said, adding it had been hailing earlier. “There are flashing lights up and down as far as the eye can see.”

He added he could only see one tour bus that looked as if it had just suffered a dent from the rear.

Zillwood, who has lived in the area for 14 years, said there’s been a bad crash there almost every year because the road gets so slippery from the snow with the hill that goes up into Hope.

RELATED: Condition of the Coquihalla concerning for tourists

Photos from Graham Zillwood, who lives across from site of crash that’s closed #Coquihalla Highway. pic.twitter.com/ZSySvr1686

Susan Beauchamp was a passenger on one of the tour buses.

“We slid into a transport then we got rear-ended,” she said. “Hope is sending buses and we will be going to the high school and then we’ll be going to our various destinations.”

The RCMP has still yet to comment on the crash.

Seven people have been taken to hospital in serious condition following a multi-vehicle crash on the Coquihalla Highway.

Roughly 70 other passengers, uninjured, have been taken by bus with paramedics to a warming centre. Hospitals nearby, including Chilliwack General Hospital, have called a “code orange,” in preparation for incoming patients.

Emergency Health Services confirms they dispatched 22 units to an incident 30 kilometres north of Hope about 9:45 p.m.

They are unclear the number of individuals in need of medical attention. The original reported number was close to 100 people injured, although EHS now believes that number is closer to 40.

EMS does not have an exact number of people injured as a result of this collision on the Coquihalla, at this time.

A crash involving several vehicles, including a tour bus, closed the Coquihalla Highway between Hope and Merritt Sunday evening.

The highway is closed in both directions between Othello Road, near exit 183, and Merritt. No estimated time yet to re-open, according to DriveBC.

We've received reports of a major motor vehicle incident on the Coquihalla highway north of Hope. Multiple ground and air units have been dispatched. Paramedics are at the scene assessing. More to come. #bcehs

The extent of any injuries is not yet known. RCMP have not yet commented.

Greyhound bus lines has confirmed one of its vehicles, to Vancouver from Kelowna, was involved. They report only one minor injury.

My dad was on that bus, he said he’s okay but a couple people are hurt, said the bus landed on its side in a ditch and a few other vehicles hit them..hoping everyone else is ok💕

A snowfall warning and travel advisory was issued along the Coquihalla earlier on Sunday. Environment Canada called for up to 20 cm of snow.