Surrey’s oldest surviving schoolhouse has twice been moved in 130 years, and twice closed due to pandemics of different nature.

Built in 1891 by contractor Sam Edge for a whopping $750, Anniedale was among several schools opened in Surrey as “a sign of growing population and forward-thinking residents,” according to a section of “Surrey: A City of Stories,” K. Jane Watt’s history book.

Today, the restored wood-frame building rests on the grounds of Cloverdale’s Museum of Surrey, as an example of where students learned in the 19th and 20th centuries.

The school originally stood at what is now the corner of 96th Avenue and 184th Street, in Port Kells, an area with a thriving logging industry at the time.

On surreyhistory.ca, Bob Reimer says Anniedale School was named after Dame Annie Bickerton Stanley, the daughter of Elizabeth Wilhelmina Pooley, who offered land on which the school was built.

With electric light not yet prevalent, the building was designed with many windows — four east-facing for morning sun and just two facing west, to minimize afternoon glare.

In Anniedale’s first year, 13 students were enrolled. “Many families relied on their children to work during the day and to go to school only when their labour was not needed at home, on the farm, in logging, or in fishing,” according to a heritage storyboard at the museum.

The school was closed on special days, including May Day (the first Monday of May) and Empire Day (now Victoria Day), and also if the teacher was sick (at a time when they were paid $50 a month).

In 1918-19, the school was shuttered for two months when the Spanish Flu hit Surrey.

The current COVID-19 pandemic has closed the building to tours, although the plan is to use the structure as shelter for camp kids this coming summer, according to Ryan Gallagher, the city’s manager of heritage admin and facilities.

PICTURED: Anniedale schoolhouse at its current home, outside the Museum of Surrey. (Photo: Tom Zillich)

On its original Wilson-Townline Road site, the school was a place for classes until the mid-1950s, when it became a community gathering place for the following two decades. “During all the years of its operation, it had the local distinction of having the highest percentage of its graduates obtain university degrees,” says a post on historicplaces.ca.

In the mid-1970s, neighbours campaigned to have the schoolhouse renovated after it was moved a couple kilometres west, as a crow flies, to the yard of the new Anniedale School, at 176th Street and Highway 1. “A guy named George moved it with his personal truck, in the snow, with people holding up the wires,” recalled Jim Foulkes, award-winning Surrey historian. 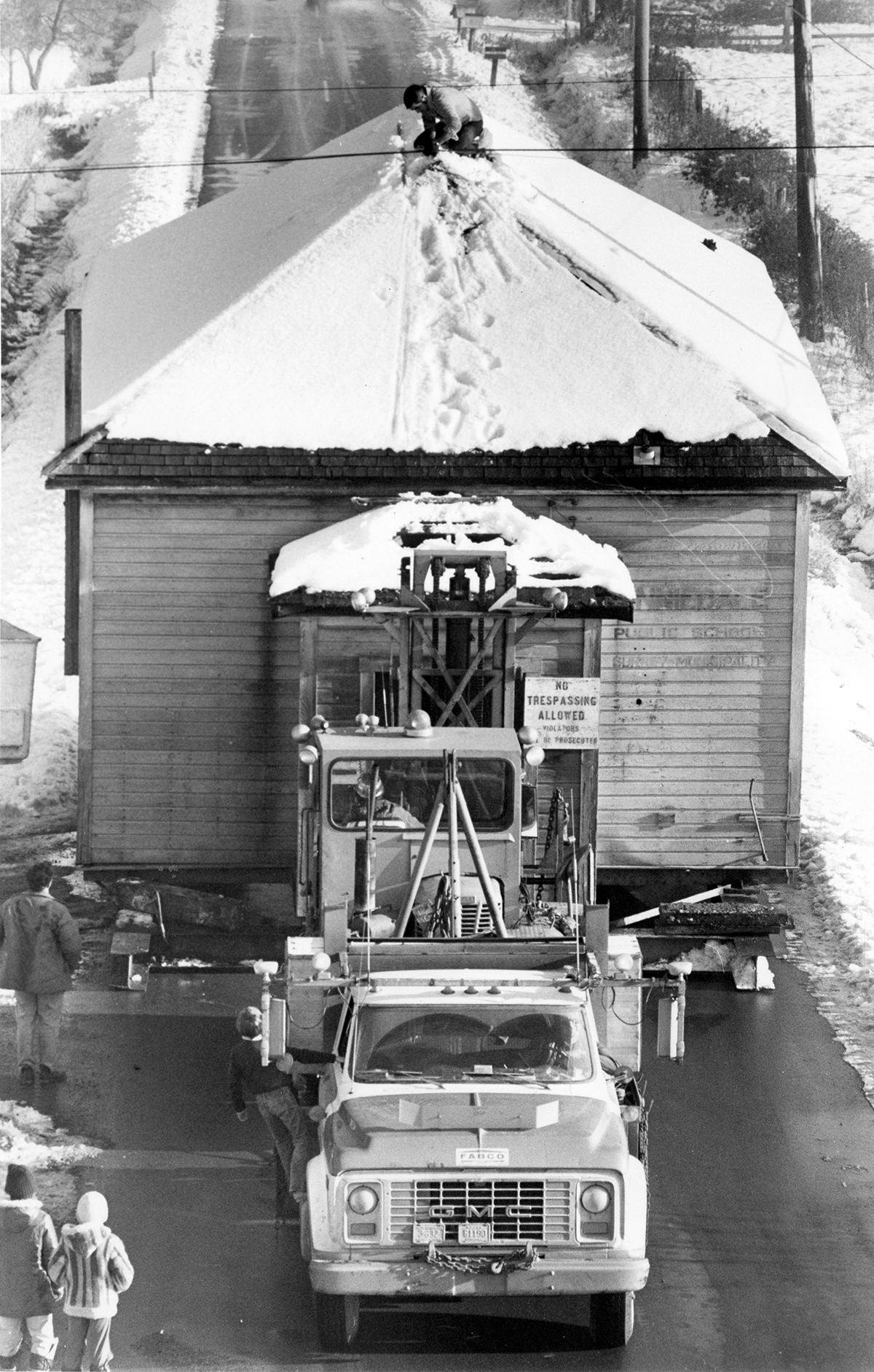 PICTURED: The 1891 Anniedale schoolhouse being moved on a flatbed truck to the site of the new Anniedale School in December 1975. (Photo courtesy Surrey Archives)

For years, the building was used for some school-related gatherings.

“I remember having fire duty, which included arriving early to light the fire so the classroom wasn’t freezing when everyone else arrived,” former Anniedale student Jeanette Ford posted on Facebook.

“My class went there when we were studying pioneers,” Jeff Billingsley added.

By 2017, Foulkes and other members of Surrey Historical Society pressed to move the Anniedale building to the new museum complex in Cloverdale, and that transfer happened in September 2018, as part of the museum’s $15.7-million expansion project.

“I had quite a bit to do that move, because people who tried before had either died or given up, and I just kept reminding Surrey that years ago we promised to save it,” Foulkes told the Now-Leader. “The school board wanted it gone (from the 176th/Highway 1 site) because they don’t do heritage, and the city wasn’t sure what to do with it. I was the reminder, the guy who kept poking the bear until it was, ‘Oh, OK, we’ll save it and move it.’

“Somebody paid for it – the province, or Canada, taxpayers,” Foulkes added. “I volunteered to move it for free but that didn’t happen.”

A decade ago, the “new” Anniedale Elementary was closed, its students transferred elsewhere, and the school district sought proposals for that building’s future use. In recent years, it’s been home to Pentecostal Tabernacle’s Ministry Centre.

“It became a big real estate concern for the school board,” Foulkes said, “and it (the 1891 schoolhouse) was an orphan, actually, owned by the Anniedale Parent Teacher Association. They gave the province a dollar for it – ‘It’s yours, get it off the property,’ you know. Ironically, that property never sold and it’s still a little island of provincial land, as far as I know, near that (highway) entrance.”

Foulkes, named a Surrey Civic Treasure in 2018, says he could dig up all the details, given time.

“I have files and files on that school,” he said, “and I hold on to those papers because with everything digital, you know, ‘Oh, put it on the cloud,’ that kind of stuff vanishes, and I’ve learned that from experience.”

Surrey Now & Then is a weekly look back at Surrey-area landmark sites and events.