While an entire province mobilized overnight to protect its citizens against the spread of the novel coronavirus, a second, parallel, health crisis quietly ramped up, killing more than twice as many people as COVID-19.

In British Columbia, there were 53 deaths from COVID-19 in May. During that same month, 170 otherwise healthy people died of a drug overdose. It was the deadliest month for overdoses in the province’s history.

The South Surrey deaths fit the profile of those who typically die from a drug overdose – young men who used while they were alone.

But the “silent victims” of the overdose crisis are the “huge” number of patients that survive overdose, but have a permanent brain injury, added South Surrey’s Dr. Tahmeena Ali, who this year was named BC Physician of the Year.

“I feel so disheartened for those families because their loved one survives, but they’re not the same loved one and it opens up a new Pandora’s box of challenges for that loved one,” Dr. Ali said. “And the cost to society in our healthcare system, financially, emotionally, is beyond words.”

Experts say one of the contributing factors to the rising number of overdose deaths has been linked to the closure of the Canada-U.S. border.

“There’s just less supply,” Passmore said. “So what that means is that the drug supply, the dealers, have been cutting their drugs with all kinds of things that are increasing mortality. There’s much more benzodiazepine, which are things like Xanax, and that doesn’t respond to Narcan.”

Another aggravating factor for drug users occurred when the vast majority population was asked to isolate at home.

“As COVID-19 hit, certainly people accessing their normal services was reduced. And people were experiencing greater isolation in their lives and losing the structure of their jobs. And of course, the drug supply became much more toxic,” Passmore said. “So the numbers skyrocketed again and they’re actually worse. I mean, 170 deaths in one month is staggering.”

Meanwhile, the federal government’s Canada Emergency Response Benefit of $2,000 per month has provided income to about eight million Canadians, some of whom are substance users.

Cole Izsak said he has had to kick out more than two dozen clients from his Surrey Back on Track recovery home since April 1. He said that’s due, in part, to the extra cash many of his tenants receive.

“It’s resulting in a lot of people using and relapsing, and it’s really kind of chaotic around here because of that,” Izsak told PAN.

Passmore said he contacted PAN to not only raise awareness about the increase in the number of overdose deaths, but to highlight community supports that are available for people who use substances in South Surrey and White Rock.

The goal is to stabilize people’s lives while connecting them to supports that outline their pathway to recovery.

White Rock’s Ryan Nielson, 26, is one of the program’s success stories.

Nielson, who used opioids daily for six years, recently kicked the addiction with the help of drugs provided to him by the OAT clinic.

“From my experience, when you’re getting to that withdrawal state, it’s pretty hard to think about anything else but your next fix,” Nielson said.

Nielson, however, didn’t describe the crisis as an overdose problem, but rather a drug-poisoning problem.

“People don’t say, ‘OK, today I’m going to take a whole bunch of whatever.’ It’s not really like that. They’re just taking the regular amount and it happens to be cut,” Nielson said.

A “Risk Mitigation in the Context of Dual Public Health Emergencies” document from the province and BC Centre on Substance Use predicted a spike in overdose deaths during the COVID-19 lockdown.

The document provides clinical guidance in the context of the COVID-19 pandemic, and relies on clinical judgment of those writing prescriptions.

The document recommends replacing both legal and illicit drugs with prescribed or regulated substances. For the first time, physicians are able to prescribe drug replacements that they otherwise weren’t allowed to prescribe.

“Even stimulant medications. So if someone’s got a dependence on something like crystal meth or crack, (doctors) can provide other, safer stimulants,” Passmore said.

A member of the White Rock community action team Tides of Change, Passmore said, is leading the charge to fight for more tele-health services so that drug users don’t need to go to their general physician to ask for a prescription.

RELATED: B.C. paramedics respond to largest number of overdoses in a single day

“A lot of folks who use substances are still very ashamed of talking to their own GPs about stuff like this,” Passmore said.

“Because not all GPs are comfortable with this topic, and maybe some have views about substance use that maybe are less-than-compassionate and certainly might not feel comfortable prescribing things that, for most of their career, they have been told is bad practice.”

Another life-saving, harm-reduction tool that came out of the pandemic was invented by White Rock resident Jeff Hardy.

Hardy created an app, Lifeguard, which is intended to provide something of a safety net for people who choose to use alone.

Hardy explained that after entering their contact information and location into the app, a person can start the application before they’re about to use a drug.

The app kick-starts a one-minute timer. With 10 seconds left, an alarm will sound, becoming progressively louder. If the user doesn’t press the red ‘stop’ button, EHS will be alerted – but police won’t be.

“This is not a tool to give information to the police, or anybody who’s going to try and force the law on you,” Hardy said.

Passmore said the app is a Band-Aid solution to a bigger problem, which is the question of why so many British Columbians are turning to substances to find temporary relief or pleasure.

“Why is this happening on such a high level, and we’re losing our sons, daughters, siblings, coworkers at such a rate?” Passmore asked.

Part 2 of this series will take a deeper look at the connection between people who suffered adverse childhood experiences and a reliance on drugs to ease their pain. That can be found here. 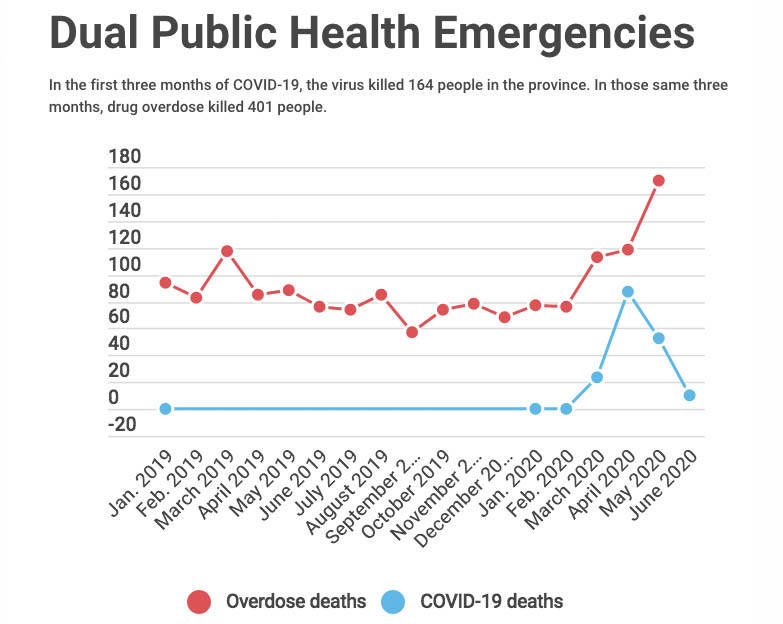