The province has declared a level 4 drought in the South Coast and Lower Fraser areas due to low stream flow conditions as extreme dry weather extends to more parts of the province.

Invoking the highest drought alert level means broad conservation efforts are expected, while major water users could face temporary restrictions and freshwater fishing could be banned on many streams.

“We need everybody to be focused on conservation and taking the correct measures,” said Forests, Lands and Natural Resource Operations Minister Steve Thomson.

Angling is already banned in many streams in the Southern Interior and on Vancouver Island, where a level 4 drought alert has already been in place.

Other streams in the South Coast and Lower Fraser are now on a watch list for potential closure. (For details on closed streams see http://www.env.gov.bc.ca/fw/fish/regulations/.)

Low stream flows and higher water temperatures mean fish like rainbow trout are at greater risk of dying if caught and released.

Fish kills have happened on tributaries of the Similkameen and Barriere rivers, according to provincial officials, and some fish were stranded in an area of the East Kootenays.

Ramsay noted most B.C. rivers and streams remain open to recreational fishing and no lakes are closed.

The level 4 drought declaration is different from municipal water restrictions stages, such as Metro Vancouver’s current water use restrictions, which are at stage 2 of the region’s conservation plan.

At level 4, the province can use its authority to reduce the allowed water consumption by lower-priority water licensees in favour of others. That could affect some industries and agricultural businesses.

A further step could be the use of the Fish Protection Act to temporarily limit water use by all other users. That’s only ever been invoked in 2009, when a long dry summer threatened kokanee salmon populations in the Upper Nicola River.

Federal biologists have already been raising concern about the effect of lower flows and higher temperatures in the Fraser River for returning salmon.

But lower Fraser levels could have another downside as well.

Farmers in low-lying areas such as Delta and Richmond that irrigate with river water may find it becomes too salty to use if Fraser flows drop further.

“We’d hoped spring rains would make up for the low snowpacks but that has not happened,” said River Forecast Centre manager Wenda Mason.

“To end the drought conditions we would need a period of sustained and significant rainfall.”

Warm, sunny conditions are so far expected through the weekend in the Lower Mainland, moderating into unsettled weather by early next week.

‘If it’s yellow, let it mellow’

Officials there are urging compliance with tightened water restrictions, particularly a once-a-week limit for lawn sprinkling.

Cities are warning and, if necessary, fining residents who disobey water sprinkling limits.

Mussatto urges residents to let their lawns go brown and dormant, limit car washing to just the windshields, mirrors and licence plates, and take other steps to reduce unnecessary water use indoors.

“Don’t let the water run when you’re brushing your teeth,” he said, adding many people also let taps run to make it cold when they could put a jug in the fridge for drinking water.

“I personally do that – if it’s yellow, let it mellow,” Mussatto said, but added that’s easier for him because he lives alone. 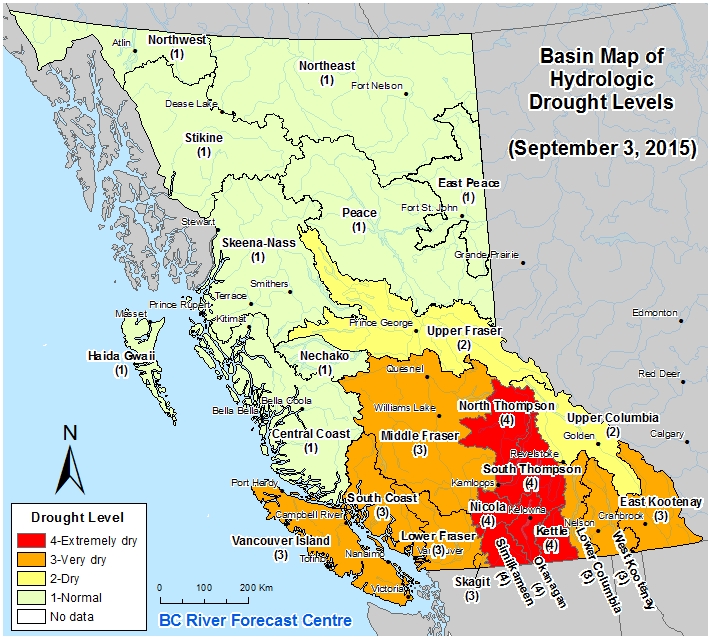 All of southwest B.C. is now at level 4 drought conditions due to extreme low stream flows. River Forecast Centre. 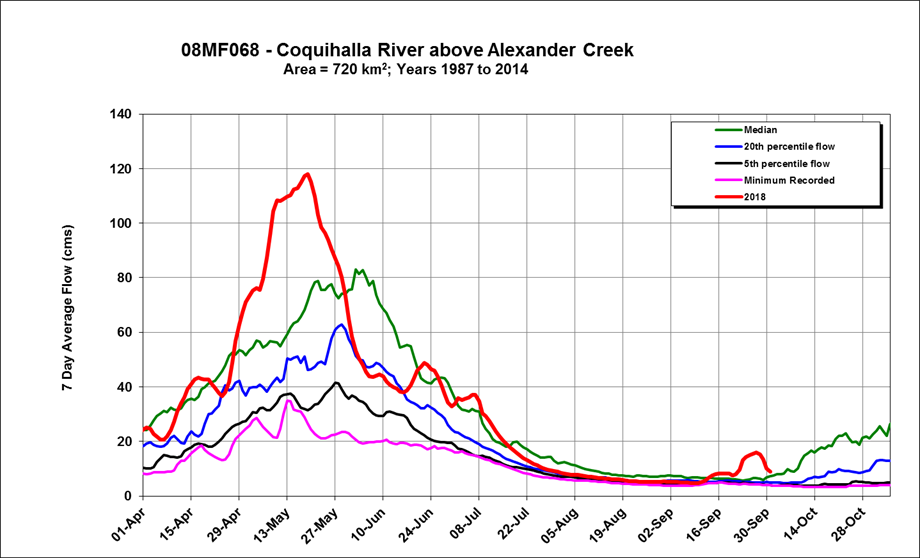