Karen Moraes has only lived in the Langley-Cloverdale area for eight years, but she’s definitely made her mark.

Moraes is raising her large family – including five school-aged children – in Cloverdale, works for the Township of Langley as the Indigenous recreation leader, was the office coordinator for the Lower Fraser Valley Aboriginal Society, and spends whatever time she has left volunteering in the community.

Last week (March 8), Basant Motors in Surrey recognized Moraes for her hard work by surprising her with a free 2017 Nissan Sentra from the dealership’s Cars for Compassion giveaway.

After arriving at the dealership, Moraes said she was handed an empty envelope, and people with cameras began walking towards her.

“I’m like, ‘okay, where are the people who won the car’,” she laughed.

“It eventually led up to the fact that I won the car. It was pretty much a blur after that.”

Prior to receiving her big prize, Moraes was driving a 1999 Toyota Sienna that was donated to her by the North Langley Community Church – years ago when “times had gotten tough.”

“I was on income assistance and going to the Langley food bank and having to walk everywhere. The church kept having to pick me up once a week to go to the food bank to get food, and eventually they gifted me the car.”

While the old car got her to-and-from her daily duties, Moraes said it was definitely time for an upgrade, as the Sienna had required a lot of work over the years.

“It’s ugly, but it drives okay. I had to replace all the door handles on it during the last freeze because all of mine broke off.”

And after a week of driving the Sentra, Moraes said she still can’t believe she won it.

“I can’t wrap my head around it. It’s so nice to drive. It’s a beautiful ride.”

Moraes added she never imagined her application would be selected.

During her time in Langley, Moraes has made up care packages for the homeless, purchased food for those in need, volunteered on parent advisory committees at Langley schools, and more.

“I always believe once you’re doing well, you give back to your community. It’s important to give back to the community, and not a lot of people do that,” she added.

The Cars for Compassion contest encouraged people to nominate themselves or others with a short essay outlining why they deserve a free vehicle. 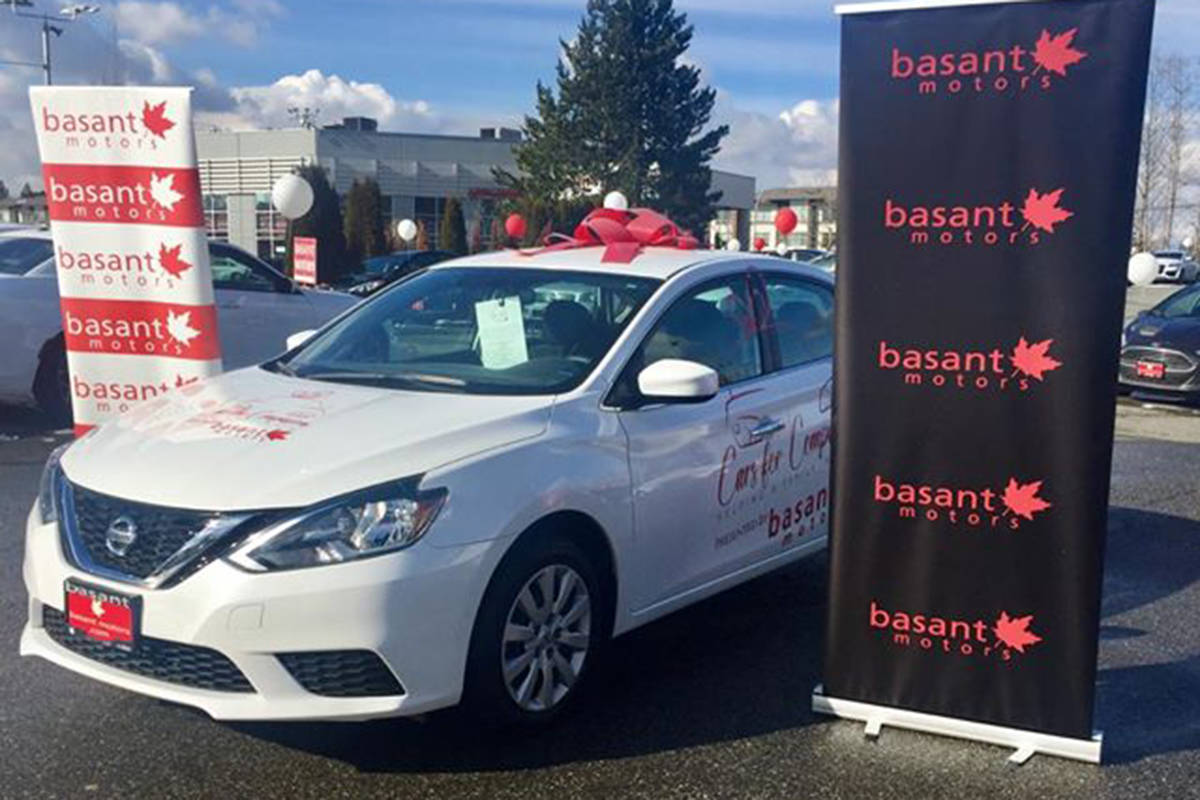 Karen Moraes was the recipient of a 2017 Nissan Sentra from Basant Motors. Submitted photo

EXPLORE SURREY: Tee up some adventures in the city

Return to school to be delayed, says B.C. Education Minister

One dead as fish boat sinks off southern Vancouver Island

The province has recorded no new deaths in recent days

Harris and Biden plan to deliver remarks Wednesday in Wilmington

Wedding rings of Michelle Buchan’s have since been recovered, but much is still missing

‘Agitated’ man pulls out knife on 3 people in Abbotsford

Witnesses sought for incident on Monday night near city hall